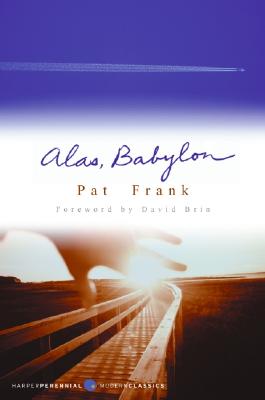 “An extraordinary real picture of human beings numbed by catastrophe but still driven by the unconquerable determination of living creatures to keep on being alive.” —The New Yorker

“Alas, Babylon.” Those fateful words heralded the end. When the unthinkable nightmare of nuclear holocaust ravaged the United States, it was instant death for tens of millions of people; for survivors, it was a nightmare of hunger, sickness, and brutality. Overnight, a thousand years of civilization were stripped away.

But for one small Florida town, miraculously spared against all the odds, the struggle was only just beginning, as the isolated survivors—men and women of all ages and races—found the courage to come together and confront the harrowing darkness.

This classic apocalyptic novel by Pat Frank, first published in 1959 at the height of the Cold War, includes an introduction by award-winning science fiction writer and scientist David Brin.

Pat Frank (1908–1964) is the author of the classic postapocalyptic novel Alas, Babylon, as well as the Cold War thriller Forbidden Area. Before becoming an author, Frank worked as a journalist and also as a propagandist for the government. He is one of the first and most influential science fiction writers to deal with the consequences of atomic warfare.

“An extraordinary real picture of human beings numbed by catastrophe but still driven by the unconquerable determination of living creatures to keep on being alive.” — The New Yorker

“An enthralling and vivid story of the follies and failures of people, their courage and cruelty, their treachery and triumphs. Mr. Frank is a magnificent writer.” — Chicago Sunday Tribune

“A warm, continuously interesting story of what can happen to a group of ordinary people in a perilous situation.” — New York Herald Tribune

“Frank is successful enough in making us believe it could indeed happen here to send a small, fearful chill along our backbone.” — Saturday Review