Tress of the Emerald Sea (Hardcover) 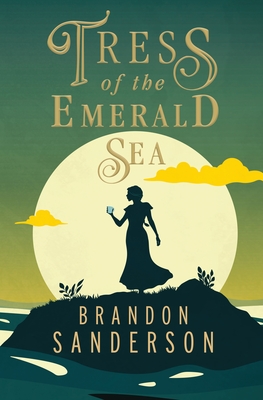 #1 New York Times Bestselling author Brandon Sanderson brings us deeper into the Cosmere universe with a rollicking, riveting tale that will appeal to fans of The Princess Bride.

The only life Tress has known on her island home in an emerald-green ocean has been a simple one, with the simple pleasures of collecting cups brought by sailors from faraway lands and listening to stories told by her friend Charlie. But when his father takes him on a voyage to find a bride and disaster strikes, Tress must stow away on a ship and seek the Sorceress of the deadly Midnight Sea. Amid the spore oceans where pirates abound, can Tress leave her simple life behind and make her own place sailing a sea where a single drop of water can mean instant death?

Other Tor books by Brandon Sanderson

Mistborn: The Original Trilogy
Mistborn
The Well of Ascension
The Hero of Ages

Mistborn: The Wax and Wayne series
Alloy of Law
Shadows of Self
Bands of Mourning
The Lost Metal

Other novels
Legion: The Many Lives of Stephen Leeds
The Frugal Wizard’s Handbook for Surviving Medieval England (forthcoming)

Other books by Brandon Sanderson

Brandon Sanderson grew up in Lincoln, Nebraska. He lives in Utah with his wife and children and teaches creative writing at Brigham Young University. His bestsellers have sold 30 million copies worldwide and include the Mistborn® Trilogy and its sequels; the Stormlight Archive novels; and other novels, including The Rithmatist, Steelheart, and Skyward. He won a Hugo Award for for The Emperor's Soul, a novella set in the world of his acclaimed first novel, Elantris. Additionally, he was chosen to complete Robert Jordan's Wheel of Time® sequence. For behind-the-scenes information on all his books, visit brandonsanderson.com.

“Epic in every sense.” —The Guardian on The Way of Kings

“Brandon Sanderson’s reputation is finally as big as his novels.” —The New York Times on Words of Radiance

“If you’re a fan of fantasy and haven’t read the Mistborn trilogy yet, you have no excuses.” —Forbes on Mistborn

“A fresh view of how a world can grow, building new dimensions into the best of the old. Sanderson continues to show that he is one of the best authors in the genre.” —Library Journal (starred review) on The Alloy of Law

“Sanderson’s fresh ideas on the source and employment of magic are both arresting and original […] Think brisk. Think fun. Enjoy.” —Kirkus, on The Alloy of Law